I was born in Southbridge, and was 9 years old at the time of the 1955 flood. My mother, father, brother, and I lived on Mechanic street at the time of the flood. My mother was 7 months pregnant at the time, and I can remember to this day the night before. It was raining and we were watching the water fill the streets. My relatives wanted us to leave even though we lived on the third floor, but my father didn't want to. On the morning of the Flood (August 19, 1955) we were watching the rain and water from our kitchen. I was looking up Mechanic street toward Worcester St., when all of a sudden at the corner of Mechanic and Worcester Streets, I saw the water come rushing down Mechanic St. It was weird as it looked like it turned left and came  right down Mechanic St. All of a sudden, the water rose until it reached the ceiling on the first floor of the house across the street, a few cars came floating down the street! I don't remember who said they thought the house next door was moving, but it wasn't their house it was our house that was moving out onto the street!!! Today I realize how lucky we were, our house only moved a few feet it settled right against the house on the corner of Onley Avenue and Mechanic St with our porch facing Worcester St. I remember my father going downstairs, I don't know how long after we stopped. He went over to the next house, and a while later he came back an brought us all over to the next house. We stayed for some time. I then remember us going downstairs and getting into a boat and then being taken to Worcester St. We got off near the entrance to the ball
field near Vic' s spa. To this day I remember the lady in the house near the the entrance giving us ice cream. After we walked the road to the ball field and went to my grandfathers house. He lived on Snow St. Later we came back to the house and my father took some pictures of us near the house and of them tearing it down. To this day I can still see the water coming down Mechanic St, and the cars floating down the street. 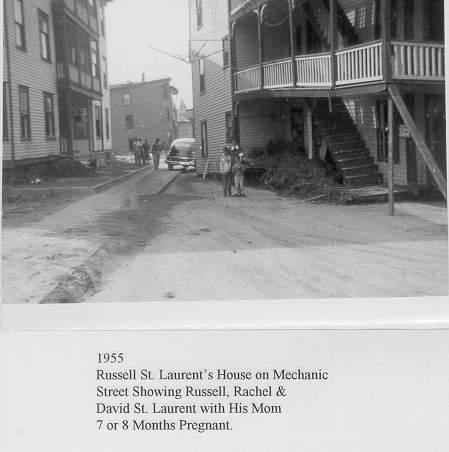 More about the Flood of 55